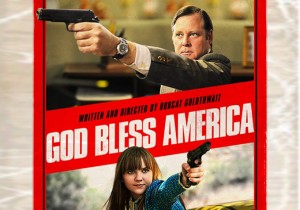 No, that post title is not a directive, that’s the name of a movie I finally ponied up to watch my last night at Wellspring before I passed out.

I’d been putting off this movie for a good long while, primarily because I heard about it not long after some nut job shot up a movie theater IRL, and there’s nothing like IRL violence to put you off lazily violent movies (when I lived in South Africa, I started walking out of movies with gratuitous violence. Unless violence has a good purpose or is trying to make a non-lazy point, I have a very low tolerance for it these days). The idea of watching a movie that could very well be seen to promote shooting people as a way to cure our vapid, self-indulgent culture of its problems turned my stomach.

But I am, if nothing else, a big proponent of protecting our ability to tell stories that we need to tell in the way they need to be told. It’s not as if this film is the first to show folks upset with the current system shooting their way to infamy.

And taking a look at the news these days, I have to say that I think this was the only way to tell this story.

This is, then, a deeply problematic movie, in which our divorced, disaffected, cubicle-living, protagonist finds himself picking up a gun and a manic pixie dream girl and setting off across the country to murder all those vapid reality TV stars and people who text their friends in movies, and people who cut you off on the freeway and – yes, basically, everyone who acts like an entitled asshole in this weirdly adolescent culture we’ve made for ourselves in America.

What precipitates this killing spree is a very strange scene at his workplace in which he’s canned for looking up the personal address of the company secretary and sending flowers to her home. I say it’s strange because I wasn’t entirely sure how I was supposed to feel about it. On the one hand, sure, the woman seems friendly toward him, but, uh, dude, she’s a  secretary – she has to be nice to everyone, and I’m sorry, but any guy who looks up your personal address in your personnel file and sends you something without you expressly asking is, indeed, a little creepy.  My assumption here is that it’s the “zero tolerance policy” response that I’m supposed to think is really ridiculous. He gets canned for looking up the secretary’s personal information. Of course, if I was a guy watching this, I might find what he did rather innocuous and not worth firing somebody for and would rail against the PC’ing of the workplace, but as a woman, well… dude. Unless I give you my address, sending something there is kinda… creepy.

So, that was weird.

The rest of the film follows our protagonist on his journey to murder a teen reality TV star and her vapid parents and ends up as a takeover of the American Idol stage. This is about when he hooks up with manic pixie dream girl, who was very nearly her own person and not a pixie, but then wasn’t, which made me sigh into my cornflakes because her writing was so punchy and the actress was so great. Folks, when you create secondary characters for your protagonists, you need to spend at least as much time figuring out them and their arc and their story as you do your protagonist, or they’ll just come off as lackluster shadowy appendages of said protagonist. And this is, of course, much more prevalent with the manic pixie dream girl, who consistently manages to have no real life, goals, or motivations outside of whatever it is she is waking up the white male protagonist to do. It’s woman-as-muse-as-thing, and it annoys.

Still: la-la-la-la ignoring the pixie for a minute, and the relentlessly, darkly brutal/comic subject matter, this film certainly did well at one thing – holding up a mirror to our own Harrison Burgeron society. You wonder why we don’t write SF stories like this one anymore? Because we already live this dystopia. We already live in the world of vapid reality TV stars and people shooting up theaters and rich kids trying desperately to pretend they’re interesting and middle aged folks with no purpose or motivation beyond making it to the cubicle every morning. It’s a darkly comic movie because it’s a darkly comic time to live in, and I couldn’t help but write in “bread and circuses” especially there at the end where we get the massive TV shooting that reminded me a ton of old Harrison from the movie version; tho of course Harrison was naïve enough to believe that you’d listen to him simply because he spoke to you. Our protagonist today knows we’re going to tune him out unless he’s got a gun or a bomb strapped to him. Our attention spans are even shorter than that in most dystopias.

I guess the depressing part about this movie is that it really wasn’t fiction for me. It felt a lot more like a perfect picture of a snapshot in time; the arrogant, egotistical, uneducated, asshole-validating culture that is American pop culture at the turn of the 21st century.

Twenty years ago, this would have been a science fiction movie. Now it was like watching a documentary.